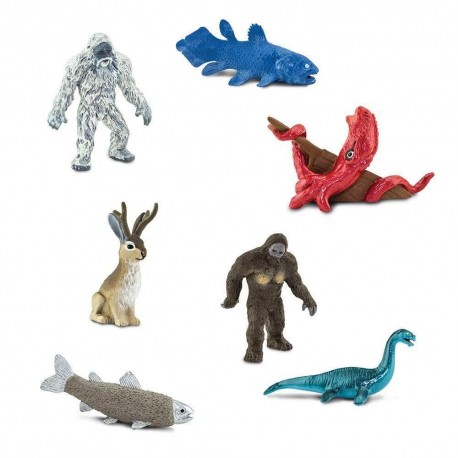 A fantastic collection of creatures

The Cryptozoology Toob brings to you creatures from myth and folklore. We present to you the

-Jackalope, the antlered jackrabbit known to wander the west.

-Bigfoot or Sasquatch of North America.

-Nessie, the famous inhabitant of Lock Ness in Scotland.

-Coelacanth, while not as questionable as the above creatures is still amazing. This fish from the time of the dinosaurs was long thought to be extinct. Known as the "Living Fossil," specimens have been discovered as recently as 1998.

Bring these fantastical creatures into your home or onto your gaming table. Don't myth out on this chance to invest in the best Cryto- CryptoZoology!

All seven creatures come packaged in a tube.